issue 2: call me when you're dead 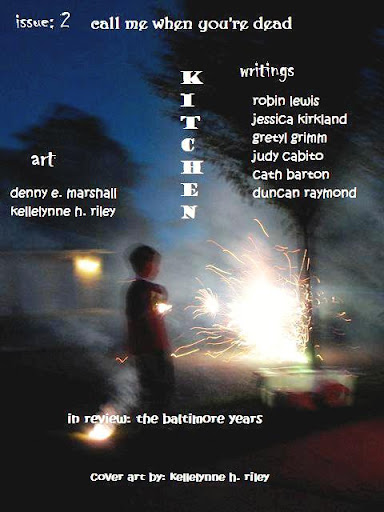 In review: The Baltimore Years

Here we are again then like two punch-drunk swans jostling for position in the same duck pond. Welcome. No need to remove your shoes (or if you’re that way bent, put them on).

In reviewing the six writers that make up the body of issue #2 we find, though it was not clear when the selection was made, that they all (with minor leaps of interpretation) circle the topic of death and dying and even the undead, the after dead.

In Robin Lewis’ flash story “Dust Storm” the narrator brings the news of a dead son to his family: “You weren’t coming back and I had to be the one to tell your folks that we’d never again hear the laugh that started in your belly and ended in your eyes”. Jessica Kirkland’s “The Dead” features a suicide attempt and the husband’s memorable (practical) solution in its aftermath: “Let’s leave this all behind. What about Utah?”

Yes, what about Utah? We don’t know but we like it. Utah sounds, feels, somehow, like a possibility.

Gretyl Grimm, besides giving the impression of someone dueling a general day to day angst of deadly proportions, proclaims in one of her Sixes “an urge to wander through cemeteries” to which we want to respond: Yes, lets. In Judy Cabito’s flash “Faux-Monet” the “it” is never revealed but we get a steady feeling that something traumatic has happened. Maybe even death. In the last two stories, Cath Barton’s “Rolling along” and Duncan Raymond’s “The Magic of Television” death plays its part with flair under strange and otherly circumstances, in a perhaps more direct way.

Denny E. Marshall’s drawings seem not unfamiliar with the topic either and even our own kitchen reviewer Mr. Peters appear to have fallen on a patch of bad blood.

Death is in the air, friends, but also pastry, absurdities and the slumbering ache of childhood. Funny dark and ordinary things are going on in these stories and we think they all have their own Utah-moment. The funny in the bleak? The bleak in the funny? We have yet to work out this might mean. A strive for something more, else, new, old, different? A kind of strive, urgency, yes. There is an urge. That what is said is of some importance. That a string of words well-strung don’t need a cut-up machine to brandish new meanings, but that a basic understanding of how language works suffices. Take a word like Utah, or popcorn, or some old used song lyrics and pack them with your own particular brand of meaning and you’re well on your way toward a poem. Or story. Something good.

We asked for prose and were answered with a decent turnout of the same. Since the first issue we’ve had to reject more submission than we thought possible for a newly started magazine of this kind. Not an unpleasant quandary to be in, really, and we’re thankful to all those that did submit but that ultimately didn’t end up in the issue. There were some pretty good ones that we couldn’t find room for. Because of the turnout we also decided to increase the upward limit for writers per issue from 3 to 6, plus some other things.

We’re especially thankful to Kellelynne H. Riley for providing photos to go with all the writers in this issue (and also the cover).

All right. That’s enough ceremony for one Sunday.

In closing, a minor thought in passing and perhaps a question or two. Having spent the last two months brushing shoulders with the online publishing world (both eyes squinting) we find it to be a strange world indeed. For instance, we wonder, what does it mean when one person have over four hundred publications (of our submitters, the record so far stands at a little over a thousand) spanning not a lifetime but “recent years” and in mostly online venues?

We find the sheer numbers quite overwhelming and struggle to suppress a longing for a time when twenty poems over a five year period was a time well spent, if for nothing else than the illusion that what finally ended up on the page was the result of some kind of struggle, careful scrutiny and choices made. That what’s there is not just what’s there but also everything that isn’t. To what extent does quantity affect quality? We think it does. How much Dostoyevsky is too much? Maybe. Who reads all this stuff? Tomorrow’s archeological dig outs. Does it need to be read at all? A country club where everybody raises their glasses to toast all at once. What’s then the point of yet another such venue, like our own?

We’re not sure, but we want to try to carve out a little room of silence against so much noise where an occasional human voice can be heard singing with fervor. That’s all, really. Can you hear us carving? We’re carving. Carving and etching and slashing away.

We hope that if you take some time to read some of the stories that they may sing for you too, carve and sing, sing and carve, and that when they’re done singing they will linger with you for a minute or two, add some color to an otherwise gray afternoon or morning, that they may move you in some way or other.

Goodnight from a poorly but passionately lit…